On Thursday 29th October 1936, at a meeting held in the Masonic Temple in Linlithgow, the RSCDS West Lothian Branch was born. There were, initially, 26 founder members with the numbers later rising to 32.  Approximately six months later a Constitution was drawn up and the first Branch Class was started at Broxburn with 54 members.  The funds then stood at a healthy 3/9d!

March 1938 saw the first Branch dance in Linlithgow and in November that year the Branch organised a Country Dance Festival in Linlithgow Academy, with Miss Jean Milligan as Adjucator.

By 1939 the membership had increased to 49 and classes had been started at various venues but, although some classes managed to carry on, most had to be discontinued due to members attending First Aid and ARP classes.  The Branch struggled on during the war years, despite the black-out and travel restrictions, with proceeds from local dances being donated to the Red Cross and War Comforts funds.

In 1945 a great effort was made to return the Branch to its pre-war state and in the following few years, classes were restarted and social functions arranged.

By 1947 the membership had risen to 63 and 3 members had completed their Certificate at Summer School and in 1951 the Branch took over the responsibility for evening classes in Country Dancing, formerly run by West Lothian Education Committee.  Membership by then had risen to 114.

In 1952 Society was allowed to add “Royal” to its name, with the permission of the late King George VI and membership of the Branch continued to rise. A few years later there was a falling off of members, causing some concern, so it was decided to run several classes for children in an effort to promote interest.

By the 21st Anniversary in 1957 the Branch was very healthy again and a 21st Birthday Dance was held on 25th October in Linlithgow.  This was a great success with around 90 members attending, including 10 Founder members.

Unfortunately, between 1965 and 1973 membership and interest declined dramatically and in two years during this period no AGM could be held due to the lack of a quorum.  In October 1973 a dinner dance was held to celebrate the 50th Anniversary of the RSCDS, which has continued to be held each year since as the Annual Dance, initially in the Co-op Hall in Bathgate then, in later years, at the Canon Hoban Hall in Broxburn.

By the 40th Anniversary in 1976 things were looking up. The Branch was back up to 100 members, an Anniversary Dance was held in Bathgate and in 1977, Day Schools were restarted. 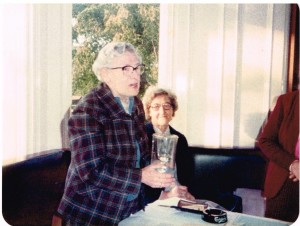 In 1983 the retiring Chairman, Miss Martha Y Cunningham, was presented with an engraved Edinburgh Crystal goblet by Chairman, Mrs Isabel Rae, in recognition of her long and faithful service since becoming a member in 1943 and in 1984 she was presented with a Branch Scroll on her appointment as the first Honorary President, but sadly died in August that year.

Our Golden Jubilee in 1986 marked a year of celebrations for the Branch.  In May they hosted a reunion of members, including one 92-year-old founder member, at Ladbroke’s Hotel in Livingston. Money from the estate of Miss Martha Y Cunningham, was used to purchase a die from which badges for Office Bearers and Committee Members were made. A booklet was published celebrating 50 years of the Branch’s history and also contained dances and music. The Annual Ball, held at Bathgate, was a great success and the winning dance in our Competition, Fhiona Martin’s Strathspey – devised by Mrs Agnes Martin (now Agnes Macmichael), was danced by 10 mother and daughter couples, of which the Branch had 14.  Miss Marjorie Duffield was asked to teach at Summer School for the first time and has continued to do so every year since, a splendid achievement of over 25 years continuous teaching, including serving for several years as Depute Director and a four year term as Director. On 29th October a reception was held at the Burgh Halls in Linlithgow, to celebrate 50 years to the day from the Branch’s inaugural meeting and the celebrations ended with a weekend visit to Pitlochry Hydro Hotel where Jack Stalker’s Band provided the music.

In 1979 Miss Kitson decided to retire as Honorary President and the following year, Miss Margaret Moir was appointed to take over the position.

In 1991 the branch decided to hold a Children’s Festival, the first for over 50 years.  It took place at Bathgate Academy with over 100 children attending, and was so popular it continued to be held each year until 2010, when lack of numbers forced us to discontinue and the event was changed to a family dance.

This year also saw our first weekend to the Angus Hotel in Blairgowrie, which continued in October each year until the last visit in October 2015, when it was decided not to return and to look for a new venue.

In 1992 Branch members took part as independent dancers with 180 others from all over Scotland at the Edinburgh Military Tattoo.

The Branch entered its 60th year in 1996 and hosted a reunion of older members at Oatridge College.  The guest speaker was Mr Alan McPherson, the archivist of the Royal Scottish Country Dance Society.  A new Chain of Office was purchased and first worn by the Chairman, Mrs Isabel Rae.  On 5th June, dancers took part in the radio programme “Take the Floor” hosted by Robbie Shepherd at Linlithgow Academy, with over 200 dancers attending.  A bus trip was arranged to Helensburgh where members enjoyed a day out culminating in a dance in the evening with the members of the local branch.  The Branch commissioned commemorative T-shirts and tea towels with a personalised logo.  There was also a return weekend to Pitlochry Hydro.  On October 29th the Branch held a celebration reception at Linlithgow Burgh Halls and welcomed members and friends and representatives from neighbouring branches.  A book was produced with a selection of dances submitted by dancers from the West Lothian Branch.

In 1998 a most enjoyable Festival of Dance and a Ceilidh was held in Linlithgow Leisure Centre to celebrate 75 years of the RSCDS.  Chairman, Mr Bill Clements and Mrs Linda Gaul represented the Society.  A celebratory cake was cut by Mr Bill Clements and Mrs Isabel Rae.  Mrs Agnes Macmichael retired from teaching the Branch class after 14 years; the class continued under the tutelage of Mrs Margaret Masterton and, subsequently, Mrs Margaret MacGregor.  Mrs Marjorie MacRae and Mrs Isabel Rae represented the Branch at a reception in the City Chamber in Edinburgh at which Her Majesty the Queen was present and talked to members from the United Kingdom and abroad.  Brian and Marjorie MacRae also attended the Royal Garden Party at Holyrood House.  Mrs Isabel Rae retired as Chairman after 15 years and was presented with a Caithness glass bowl by Mrs Jenny Binnie on behalf of the members.

In 1999 the first visit to the Royal Hotel at Dunkeld took place.  This tradition continued until 2015, when it was realised that the hotel was no longer suitable for some less able members and the venue was changed to Fishers Hotel in 2016.

To mark the Millenium, in March 2000 the Branch ran a “Scottish Day” for girls of West Lothian’s Girls Brigade Companies for the first time.  This comprised the study of the traditions of Scottish Country Dancing and its music and instruments and the telling of Scottish stories.  The children ended a very successful day with the dancing of ‘A Reel for Jeannie’.

In the same year, Mrs Marjorie MacRae was appointed Director of the first RSCDS Winter School held at Atholl Palace Hotel in Pitlochry.

The Queen’s Golden Jubilee in 2002 was celebrated with a recording of “Take the Floor” from Holyrood House, in which a team of dancers from the Branch took part.

A second ‘Scottish Day’ for the Girls’ Brigade took place in 2004 following the same format as before and with just as much success.   In October the last West Lothian Charity Dance was held.  Mrs Marjorie MacRae was invited by Arts West Lothian to select and coach a team of children to dance in a Showcase Musical event in the Usher Hall in Edinburgh entitled ‘The Best Years of our Lives’.  Ten pupils from Uphall Primary School participated, along with over 550 children, consisting of musicians, choirs and dancers from West Lothian Schools.  The Branch was also approached by West Lothian Arts and Cultural Services to set up workshops for adults with special needs to allow them to participate in Scottish Country Dancing.  These took place at Howden Park Centre and the first very successful session ended with a Ceilidh.  The sessions continue to the present day.

In 2005 several members were invited to the Linlithgow Club’s 25th Anniversary Celebration Dance in Linlithgow Academy.  The Branch lost a good friend and colleague with the death of Miss Muriel Gibson, retired secretary of the RSCDS.  Miss Gibson was a regular guest at our Children’s Festival and visited us in Uphall at the end of our Reel Aid Day celebrations.

We held a number of celebratory events for the 70th Jubilee in 2006: on 14th May a reunion of former members, on 2nd September a Quadrilles Workshop with teacher, Jimmie Hill and a reception and celebratory dance on September 30th. We also published a book of new dances by West Lothian members.  In this year also, Mrs Marjorie MacRae was awarded the Society Scroll and Mrs Isabel Rae was presented with the Branch Award for the work she had done in sustaining the West Lothian Branch.

In 2011, the Branch Award was presented to Mr Jack Stalker, whose band has been associated with the West Lothian Branch for many years.

Following her move to England, Mrs Isabel Rae felt she was unable to give the same commitment to the Branch and her position of Honorary President and decided to resign in 2012.  In her stead, at the AGM in 2013 Mrs Marjorie MacRae was elected as Honorary President by the Committee as the obvious person to fill the role.  Mrs Agnes Macmichael was also presented with the Branch Award at the same time, in recognition of all her work within the Branch and with other Scottish Country Dance groups.

In June 2016, a day trip was organised to celebrate our 80th Anniversary, with a return visit to the Royal Dunkeld Hotel in Perthshire for high tea at the hotel followed by dancing to CDs, after a stop in Perth for lunch and shopping.  In October, our Autumn weekend was moved to the Cairndale Hotel in Dumfries, with over 80 members and friends attending.  On the actual Anniversary of the Branch (26th October) a reception was held prior to dinner with Mrs Marjorie MacRae, our Honorary President, and Mrs Margaret Harris, Chairman, cutting the Anniversary cake.  Mrs Margaret Harris made a brief speech and read a poem composed for the occasion, then a group photo was taken of everyone present. Photos of the Dumfries weekend may be viewed here

Although numbers have dropped slightly in recent years, West Lothian Branch is still striving to recruit new members and promote Scottish Country Dancing throughout the region.  Reunions of former members are held on a regular basis and the Day School continues to be held each year, with a guest teacher being invited from other areas of Scotland to take the class.  The Family Dance is proving successful in its aim to encourage children of families and friends of members to learn Scottish Country Dancing.

The successful continuance of the Branch is totally due to those who have worked so hard over the years to make it happen.